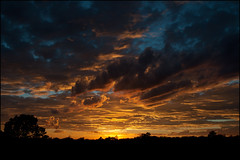 Imagine you're a happy-go-lucky meat-eating omnivore. Eating your roast beef, turkey, and tuna fish sandwiches. Enjoying a burger or two at seasonal cook-outs. Savoring some pulled pork on occasion. Eating your fair share of chicken (which is pretty much in everything, it seems). Indulging in sushi. For you, life is good.

That was me, Mike.

Then my lovely girlfriend started doing research into the reality of factory farming and started reading Eating Animals. She was appalled. And she impressed those feelings onto me.

While I've always been, on some level, aware of the horrors committed by factory farming, I can't say that I had ever truly internalized them. I just accepted them as sad facts of life and quickly shifted my attention to more immediate matters. But, having someone else to discuss the issue with changed that.

My girlfriend's vocal enlightenment caused me to rethink my eating habits. As someone who has always been ready, willing, and eager to re-evaluate and adjust my diet, this wasn't a big deal. However, I wasn't prepared to just give up meat.

To be honest, I think human beings are meant to eat meat. Admittedly, I haven't done any significant reading on the topic, but I'm pretty sure that hunting has been a significant part of our species practices... forever. To think that we can/should simply turn our backs on our natural origins - is folly.

As such, I didn't see myself going 100% vegetarian. It just wasn't logical. And I'm nothing if not logical. 😃

My initial course correction was to take greater control of the meat I consumed. At that point, I had already been roasting and pulling whole organic chickens for a while - as opposed to buying canned or prepared chicken breast. But, it appeared that organic chickens weren't a cure-all. They were being raised in shitty, inhumane conditions by industrial-sized outfits just like conventional chickens.

I decided that my next chicken was going to come from my local organic grocer, sourced from a small, local, Certified Humane poultry farm. The chickens were noticeably smaller, which I now took to be a more likely sign of quality than a USDA organic label.

I latched onto my discovery of Certified Humane. I quickly made a wholesale shift to MOM's for my groceries (from Wegmans). From that point forward, I'd make sure all of my milk, yogurt, and other dairy products were Certified Humane. As for my roast beef and turkey sandwiches, I'd shift away from them - maybe to hamburgers made from Certified Humane beef. As for sushi and pulled pork and other dishes eaten out, I wasn't ready to tackle them yet.

For about a week, I was set. I had my dietary changes mapped out.

The Myth of Sustainable Meat

Then I read the article The Myth of Sustainable Meat. If you haven't read it, I'll sum it up - there is nothing sustainable or OK about eating a typical American amount of meat, regardless of how humane or properly-sourced the meat is.

That was a "wow" moment for me.

As a result, I felt a bit left in the lurch. So much for my well-crafted plans for changing my diet.

I went back to the drawing board. Out went the chicken. Out went the beef. Out went the pulled pork (*sniff*). Out went the burgers (ouch). Way down came the milk. None of it seemed justifiable or logical anymore. I was now informed of the issue/problem. And I didn't want to be part of that problem anymore.

I made a number of compensating changes to account for what I was removing from my diet (I'll skip the details for now) - always with sustainability (and practicality) in mind. But, at the end of it all, I wasn't prepared to brand myself a vegetarian. I still felt strongly that human beings are meant to eat meat. Not as much as most Americans do, but some. However, it was going to have to be guilt-free and properly-sourced.

Searching for a Label

I was very pleased with this change. I felt good about it. I wanted to tell people about it. Only problem was, I didn't really know how. I didn't know how to describe, convey, or label this approach to eating.

The simplistic option was to classify myself as a vegetarian. But this really wasn't accurate - or satisfying. It didn't truly capture my beliefs or actual stance. I did some thinking on it - for a good while. Finally, a word popped into my head. I tried the word in a search engine and, to my delight, I got results! It was a real word. A real thing.

How cool! I was pleased. I now had a succinct and accurate word I could use to communicate my thoughts and feelings. This discovery led to the next issue, though. Nobody's ever heard the word.

No surprise, really. The sustainatarian universe (at least online) is fairly tiny.

And now there's me. 😃 I gotta' believe there's more sustainatarians out there. Well, obviously there are, since the topic of sustainable living is a relatively popular one. But, I'd like to see people adopt the term "sustainatarian" more so that it makes its way more solidly into the internet's (and, thus, world's) vernacular.

If you are trying to live a sustainable lifestyle, I encourage you to self-identify as a sustainatarian. Without an easily and concisely communicated identity, it's difficult for a community to grow.

Jo, Becky, and the sustainatarian.ca woman have started something. Keep it going.

Are you eating and/or living in a style consistent with sustainatarianism? Does Jo's definition work for you? Leave a comment. And consider giving a thumbs up on one of the definitions for "sustainatarian" on Urban Dictionary.

or
Add your voice to the discussion (8 comments so far).