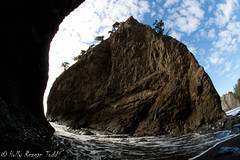 I learned this during the 1st Annual Baltimore Tech Crawl, whose second stop was the Baltimore Police’s Citiwatch control center. Here, Lt. Hood gave a presentation (to me and my fellow crawlers), during which he noted that the system currently has 609 cameras in place. However, not-too-distant plans call for thousands of cameras.

Lt. Hood ended the presentation with a selection of recorded footage showing crimes in process, frequently with officers arriving onto the scene within seconds. It was all very impressive - what with all those cameras manned continuously by (for the most part) retired police officers.

Being that (almost) everyone on the crawl was a techie, and that techies tend to be a forward-looking lot, many quietly expressed reservations about the program - and its expansion.

However, I didn't sense even a smidgen of trepidation in Lt. Hood's presentation of the program. He talked of the program's success like a proud poppa. He was almost giddy when talking of the expanding camera count and the prospects of tapping into private camera networks.

It's this unapologetically see-no-warts attitude, completely devoid of any counter-balancing voice that bothered me the most. I would have liked to have heard at least some mention of restraint or drawbacks, but I didn't catch any.

"No more anonymity, not in Baltimore, not downtown."
- Baltimore Police Lt. Samuel Hood

The fact of the matter is that these cameras are recording activity in public spaces. There shouldn't be any expectation of privacy there. I get that. Even the private camera networks are typically trained on public (albeit sometimes enclosed) spaces.

The inevitable question is, of course, where does it stop? The natural answer is "at home". But technology is tricky. What are the implications for the part of our lives spent online? On the internet, what's the equivalent of a public space? Is it all private? All public?

The interactions we have and actions we take outside on the street are, apparently, fodder for all manner of government and private surveillance. But the same interactions/actions taken online are somehow protected by a privacy policy? Really? I hope so, but I'm skeptical.